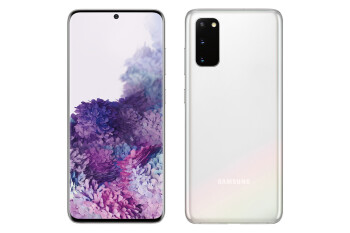 While T-Mobile said the other day that Sprint’s owners of the Galaxy S20 5G will be thefirst ones to benefit from both 5G networksat the same time by month’s end, the model is still grayed-out in Samsung’s store if you choose Verizon as a carrier.America’s largest cell phone operator has only theGalaxy S20+and Ultra in its roster for now, while the S20 5G is coming at a later date. That very date may actually not be that far off, as Evan Blass has tipped off Samsung’s Verizon version of theGalaxy S205G.
Verizon’s 5G network is now built around the ultra wideband mmWave that offers the fastest 5G speeds but later in the year Verizon will have it on lower frequencies that provide better coverage, and that’s when the Galaxy S20 5G will benefit fully from its launch in the carrier’s stores.

Some analysts believe that Verizon is actually preferring to subsidize the adoption of the more expensive to make mmWave phones, and has strong-armed a bunch of handset brands like Samsung, OnePlus and even Apple to offer it more of those.

The reason that Big Red might be accepting a lower margin on the mmWave phones which need additional modem filters and antennas inside compared to the ones that only have to support low- and mid-band 5G, is that the cost to supply a gig of data is much lower for mmWave equipment. According to Joe Madden for Fierce Wireless, the cost per gigabyte is much less than all other options when using Verizon’s 28GHz stations, and in this day and age of heavy video streaming, the push to keep users on mmWave phones will pay off better in the longer run.We’ve actually known that the S20 (SM-G980) model won’t support mmWave networks before Samsung announced the series, even in its SM-G981U reincarnation that supports lower 5G bands like those on T-Mobile or AT&T. Back in January, wefound the S20 listed at the FCC as a device that “operates in the following bands: Multi-band LTE, 5G NR (n71, n5, n66, n2, n41).”

The n261 band, in particular, is Verizon’s 28GHz spectrum that delivers the blazing fast 5G speeds that get touted in marketing materials but has trouble penetrating thick walls and even your hand if there weren’t a bunch of antennas around the frame of all mmWave handsets.

While the leaked image of Verizon’s Galaxy S20 5G doesn’t really tell much on its own, except that Cloud White will be one of the colors that it will be available with at the carrier, the implications are several.

In fact, you can buy the unlocked Galaxy S20 from Samsung right now, and use it on Verizon right away, as the carrier supports it as BYOD gear activated on its network. Or, you can wait until next month or June to get the real S20 5G model.

We asked Verizon to confirm the exact release timing and our favorite press person George Koroneos confirmed that “It will be available in the first half of 2020.” Given the Evan Blass leak, the Galaxy S20 availability on Verizon shouldn’t be that far off, and we wouldn’t be surprised to see it land in the carrier’s roster as soon as next month.